© 2005 - 2023 Blackthorns Sun Club - Permission must be sought from the webmaster to use any text or image on this website.

Pippin Wood, an ancient broadleaf woodland, is owned by Pippin Enterprises Ltd and managed under the stewardship of Blackthorns Sun Club.

The area of the Wood was enlarged in the year 2000 by the return into ownership of the area now locally known as “Gravel Lea” due to the condition it was left in by the previous owners, the centre of which is largely denuded of trees.  This action allows Pippin Wood to return to its original size as it was pre the split in 1969. 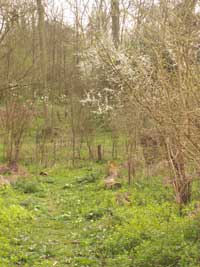 Pippin Wood is situated close to the northern borders of Bedfordshire towards Northamptonshire.

Slight slope to the south. 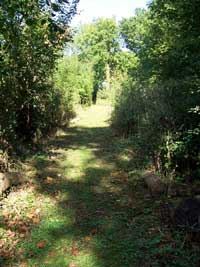 The site gently slopes from the northern end uniformly down to two levels at the southern end, the western side lower than the eastern side.

The wood is designated as ancient woodland and a prime site of nature conservation importance, and lies within an area designated as of great landscape value.  The presence of plants such as bluebell, yellow archangel, dogs mercury and other wild plants support this designation.

The land on all sides of the wood is used for agriculture. There are other nearby woods.

Use of Pippin Wood. 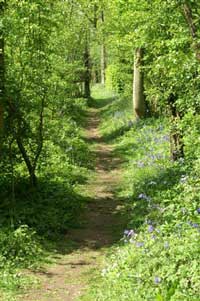 The wood provides the base and recreational facilities for Blackthorns Sun Club.  The Club took up residence in 1969.  The main facilities include games courts for Miniten, volleyball, pentanque and outdoor badminton, with an in-ground heated swimming pool, sunbathing lawns and footpaths for leisure walks through the wood.  Space is also made over among the trees for car parking and weekend overnight camping (tents and caravans).

The wood was used during the Second World War as a storage depot by the US Airforce.  During this time various roads and concrete foundations for buildings were constructed.  In approximately 1950, the wood was clear-felled for timber.  Between then and 1969 the wood was left unmanaged, and became overgrown.

Generally, the majority of the wood is managed as coppice-with- 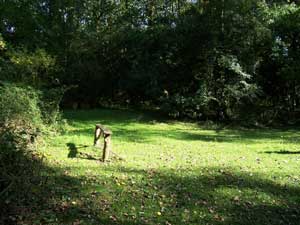 standards regime on a nominal 10 year cycle.  Coppice areas are treated like a long chain - each link being a year’s work of the rotation scheme.  The rotation is dependent upon plant growth rate and availability of volunteer labour.

Towards the centre of the woodland is an area being left as wild wood.  In this area trees are allowed to grow and die as nature dictates.  This will close the canopy and allow a natural habitat to evolve for the refuge for many small animals and insects.  Birds will also benefit.

A strip around the boundary of the wood, including the hedge, is encouraged to become a dense shrub layer to provide a visibility screen between the outside of the wood and the inside.  The shrub predominately consists of Hawthorn, Blackthorn, Ash and Hornbeam, with brier and bramble forming a tangled barrier.

In various places the boundary is relatively thin.  These areas 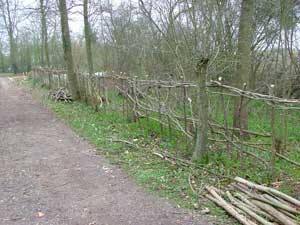 are encouraged to thicken by selective cutting and thinning.  Hedge-laying techniques are used to improve the barrier density and to stimulate regenerative growth.  Limited replanting with specific species of shrub, namely Hazel, Hawthorn and Blackthorn, is carried out to supplement the natural regeneration of the layer.

Generally the work in this layer uses a rota system fitting in with that for the coppice areas such that no two worked areas provide visibility of the centre grass areas by the outside public gaze.

The grass areas are maintained as lawns and playing areas.  The main use for these is sunbathing.  Although the grass is cut regularly, the cutting frequency is such that grass length varies from area to area.  Small areas of these lawns are left to grow wild during the Spring or Summer months and then cleared during the Autumn.  The areas vary from year to year and dependent on the varieties of wild flowers found to be prevalent.

Across these areas of grass, standards (trees) are allowed to mature.  They are trimmed occasionally to reduce the spreading shadow although otherwise they will attain their normal growing height.  Around the grass areas the shrub and trees are cut in appropriate positions to form hedges to act as windbreaks and screening.

The “Old Mans Beard” Clematis and ivy will be controlled as 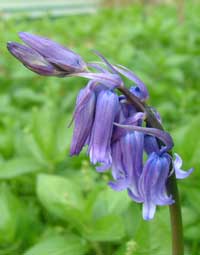 much as possible to prevent it affecting trees and shrubs.  Indeed, there are at times many examples where the creeper has smothered the trees supporting it. There are many different climbers in the wood, one of the more pleasant ones is the honeysuckle providing the strong sweet scents in the evenings.

Sycamore will be severely controlled due to its invasionary nature.

Occasional ornamental (exotic) species of trees have been planted in the past, in the areas of the main clearings to provide interest and early blossoms for the benefit of members of Blackthorns Sun Club, including flowering cherry and almond. These will not be replaced on their demise.

Ditches and surface water soakaways are cleared as necessary to prevent local flooding especially on the site roads where small “rivers” are apt to appear during heavy rain.

The woodland paths are kept open by general trimming and removal of low branches to provide members with interesting walks through the wood and provide access to and from various glades and other spaces. The paths also allow access to the areas of the wood for fire-fighting in the event of the need; this is especially important during spells of dry weather. The few rides are the evidence of old roads which are now heavily overgrown.  They lead now to the many footpaths.

Many natural habitats are being encouraged for various animals, insects, birds and wild flora.  No particular specie is being encouraged, but a wide diversity is expected. 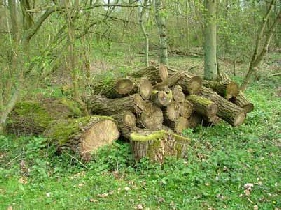 maintain environments for fungi and insects, etc.  This is supplemented, especially in recent years, by creating dead hedges (barriers within the wood structure made from the larger branches of cut trees) and the planting of cut trees to increase the quantity of dead wood standing.

Cut wood is used to provide edging of the paths and car parks, periodically replaced as they rot away.  Wood is also used for boundary fencing.

There are no ponds or other water retaining features, so water based animals are not expected.  However, there is evidence of burrows in the banks of ditches.

Animals and birds making use of the wood include voles, moles, hares, 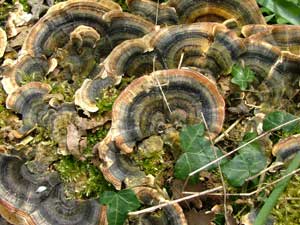 stoats, foxes, weasels, rabbits, various finches, siskin, bluetits, wrens, robins, blackbirds, lesser spotted woodpecker, green woodpecker, pheasant, partridge, owls to name only a few.  Bats have been seen flying around in the Summer evenings.  There is of course a myriad of insect life, fungi and tree lichens, the latter indicating a low level of pollution.

The variety of tree and bushes provide a wealth of Spring and early Summer flowers feeding the insects that become Autumn fruits to feed the fauna. 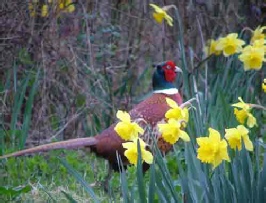 wood, as well as the occasional grey squirrel.

The lighting of open fires is actively discouraged.  Bonfires are occasionally fired, especially in the winter months, under control of the Grounds Manager or his nominee, to remove the tree and shrub brash (cuttings).  Care is taken to avoid dense smoke drifting across the public highway and causing a danger to vehicles.

The Blackthorn is a deciduous tree like shrub, growing to around 12ft in height. The bark is rough and scaly; bright orange under the grey surface. It is dense and thorny with branches and twigs that twist in all directions. The sapwood is light yellow and the heartwood is brown. Its small dark green oval leaves turn yellow in autumn and fall in winter, leaving a twisted black skeleton. As its name suggests, it bears long sharp thorns. 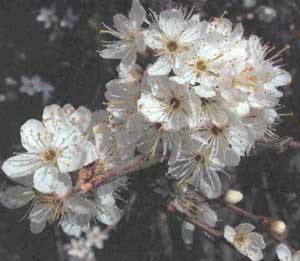 The flower is musk scented; small and delicate, white with oval petals clustered into a star shape and appears before the leaves in early March and throughout April into May.  They can occasionally be pink with red tipped stamens.

The small blue-black, sometimes purplish, berries appear in the summer and ripen after the first frost.  The sloe berries are renowned for making into sloe gin and jam, whilst the juice can be used for ink or a strong red dye.  Tea made from the powdered bark has a calming effect on the nerves. 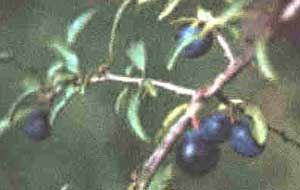 The blue-black berries of the Blackthorn

It has commercial uses; the wood is used to make walking sticks and Irish shillelaghs.

The Irish cudgel is called a bata, or more commonly, a shillelagh - named after the Shillelagh forest near Arklow, County Wicklow.  Young boys were trained to defend themselves with this fighting stick. They were also made from Oak, Holly or Ash, but most often from the hard, strong plentiful Blackthorn, which grew with a suitably formed knob at the root of the shrub. Burying it in a dung heap or smearing it with butter and placing it in the chimney cured the wood. 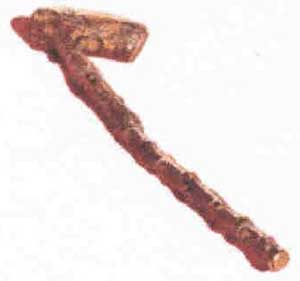 This berry was obviously part of early man`s diet as it has been found in archaeological sites from the Mesolithic and Iron Age between 8000–2700 BC.

The berries are astringent and stimulate the metabolism, clean the blood and can be used as a laxative and diuretic. They aid indigestion, eczema, herpes, allergies, colds, catarrh, neurosis, weak heart, kidney stones, skin, bladder and prostrate problems.

Liquid from boiled leaves can be used as a mouthwash for sore throats, tonsillitis and laryngitis.

According to fairy tales throughout Europe, the Blackthorn is a tree of ill omen.

It represents the dark side to witches and was often used for “binding and blasting”. A black rod is a Blackthorn wand with fixed thorns on one end; used to cause harm to others.

British Folklore says it was used in rituals of cursing whilst South Devon folklore declares witches carried Blackthorn walking sticks to cause much mischief. It can also be used in spells of protection.

Irish tales said heroes were aided by throwing a Blackthorn twig behind them as it would take root and form an impenetrable hedge or woods, thwarting the pursuing giant.

Blackthorns were said to be the thick, impenetrable thorny bramble that hid Sleeping Beauty and had to be cut through by her rescuing prince.

So there we have it......a useful plant for us to nurture.

We shall all be a healthy, protected, calmed if not slightly intoxicated bunch, dancing round the Maypole on our main lawn!! 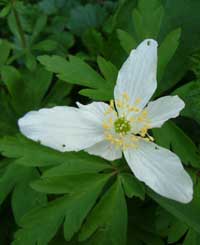 Blackthorns Sun Club Grounds Manager is also a member of the National Small Woods Association (NSWA) and Arboriculture Association, in order to keep in touch with the ever changing ‘outside’ world with regard to woods management.

Occasional events during the summer provide educational walks run by the Groundsman, offering members who are interested, an introduction to woods and their management.

The wood consists, in the main, of Oak, various Willows, Ash, 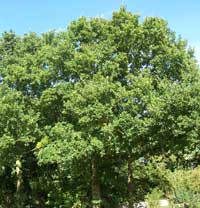 Field Maple, Hazel, Hawthorn and Blackthorn.  There are also Crab Apple, Elder, Hornbeam, Privet, Sycamore, Silver Birch, Spindle and Wayfarer, to name but a few species.  The list of species of trees and shrubs extends to more than 40.

A number of quick growing Leylandii have been planted in the past to improve the screening effect in the short term and to provide windbreaks for nursery plants.  They will be removed selectively as the indigenous species of the wood become more effective.

The majority of Hazel, Hawthorn and Blackthorn are kept trimmed at a low level to provide a major part of the under storey.  The canopy generally consists of Oak, Willow and Ash, with Field Maple to a lesser extent.  Due to the long period of neglect in the management of the wood in the time before Pippin Enterprises Limited moved onto the land there are a number of mature Hawthorn trees; selectively these are left to also be part of the canopy.