© 2005 - 2020 Blackthorns Sun Club - Permission must be sought from the webmaster to use any text or image on this website.

The Rules of Miniten as adopted by the Amateur Miniten Association of Great Britain. 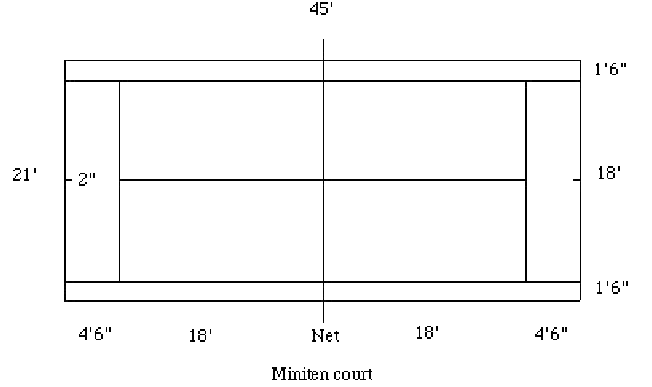 3.   (a)    THE THUG shall be the term used to describe the double faced bat with which the game is played. The faces shall be constructed of wood and shall not exceed 270mm (10.5in). A handle shall be set internally to the faces and the faces shall be left uncovered by any substance other than a preservative of stain, paint, varnish, or other like fluid. Nothing shall project beyond the faces.

(b)     THE BALL shall be of an LTA Approved standard.

4.    The PLAYERS shall stand on opposite sides of the net; the one who first delivers the ball shall be termed the Server, the other the Receiver.

6.    The SERVICE shall be delivered in the following manner - the feet shall be behind the Baseline and between the Service Guideline and the Singles Court Sideline. Contact with the ground behind the Baseline with both feet or one foot must be continuous from the start of the service: it is permissible, however, to have one foot over the Baseline, but not touching the ground, when the ball is struck. The service shall b from behind the right and left Courts alternately, beginning with the right in every game.

The server shall project the ball by hand into the air in any direction strike it with his thug before it touches the ground. The Delivery shall be deemed to have been completed at the moment of contact between the Thug and the Ball, The ball shall then pass directly over the net and hit the ground within the diagonally opposite service court, or upon any line surrounding such court, before the Receiver returns it.

The service is a fault if the Server commit any breach of the above rule but if the ball strike a natural hazard or hit the top of the net and continue in flight so as to drop within the diagonally opposite service court, a let shall be called and the service played again without change to the score.

a)     After a fault (if it be the first fault) the Server shall serve again from behind the same half of the Court from which he served that fault. If the second service is a fault, the point is lost to the Server, the players shall change to the positions for the playing of the next point to be played and the score shall be called. It shall be an understood fact that the calling of the score signals readiness to commence the next point unless either player shall, before the next service is delivered, signify that he is not ready to commence play. A fault may not be claimed after the next service has been delivered, if a Receiver attempts to make a return from a service he shall have deemed to have been ready to receive and the point shall be a good one.

7.     ORDER OF PLAY The game shall be played as shown in Rule 6. At the end of the first game, the Receiver shall become the Server and vice versa, and so on, alternately in all the subsequent games of a match. If a player serve out of turn, the player who ought to have served shall serve as soon as the mistake is discovered, but all points scored before the mistake be discovered shall count. If a game shall have been completed before such discovery, the order of service remains as altered. A fault served before such discovery shall not be reckoned. The players shall change sides after each first, third and subsequent odd game of each set, and at the end of each set.

8.    The BALL is in play from the moment at which it is delivered in service (unless a fault or a let) and remains in play until the point is decided.

9.    The SERVER wins the point if the ball touch the Receiver or anything which he wears or carries before the ball strikes the ground or if the Receiver otherwise lose a point as provided by Rule 11.

10.   The RECEIVER wins the point if the Server lose the point as provided by Rule

a)   he fails, before the ball in play has hit the ground twice consecutively, to return it directly over the net (except as provided in Rule 15) or

b)   he returns the ball in play so that it hits the ground, a permanent fixture, or other object, outside any of the lines which bound his opponent's court or

e)   he or his Thug (in his hand or otherwise) or anything which he wears or carries touch the net, posts, cord or metal cable, or band, or the ground within his opponent's court at any time while the ball is in play or

g)   the ball in play touches anything which he wears or carries, except his Thug, in his hands or hand or

h)   he throws his Thug at and hits the ball

i)   he drops anything which he carries (except his Thug) while the ball is in play.

12.   A BALL falling on a line shall be deemed as falling in the Court bounded by that line.

13.   If the BALL in play touches a permanent fixture (except as provided in Rule 14a in respect of court fittings), a let shall be called and the point played again without change to the score as it stood at the start of the point. Overhanging branches and the like shall come within this category, but not the boundary fencing.

a)   the ball touches the net, posts, cord or metal cable or band, provided that it passes over any of them and hits the ground within the Court

b)   the ball be returned outside the posts, either above or below the level of the net band, even tough it touches the post, provided that it hits the ground within the proper Court.

c)   the player's Thug pass the net, either over or round, after he has returned the ball provided the ball passes the net before being played and be properly returned.

15.   In CASE a player is hindered making a stroke by anything not within his control, the point shall be termed a 'let' and replayed.

The player who wins two consecutive points immediately following the score at deuce wins the game.

17.   The SET shall be won by the first player to win six games, except that if the score reaches 5 games all, the set be not completed until one player is two games in front.

The tie-break will come into operation when the score is 6 games all, in all sets except the last, when a normal full set will be played (See Rule 27).

18.   The MAXIMUM number of sets in an official match shall be 5, but there shall be a maximum of three sets where women take part.

19.   EXCEPT where otherwise stated, every reference in these rules to the masculine includes the feminine gender.

20.   The PREVIOUS rules shall apply to the Doubles Game, except as below:

25.   The PLAYERS to Receive the Service shall receive alternately throughout each game. The order thus established shall not be altered during the set.

26.   The BALL shall be struck alternately by either player of the opposing pairs, and if a player touches the ball in play with his Thug in contravention of this rule, his opponents win the point.

27.   The tie-break will come into operation when the score is 6-6 in all sets except the last, when a normal full set will be played.

a)   Players do not change ends at the start of the tie-break.

d)   A player who wins 9 points and leads by at least 2 points shall win the tie-break and the set. If the score reaches 8 point all the tie-break shall continue until a two point lead has been gained.

e)    Players shall change ends after every six points have been played and at the conclusion of the tie-break, irrespective of the number of points played.

f)   The player who served first in the tie-break shall receive service in the first game of the following set.

a)   The procedure for the Singles game shall apply to the Doubles game also.

b)   The serving order of the Doubles game shall follow the same order as previously in that set until the winners on the tie-break have been decided.

c)   The pair serving first in the tie-break shall receive service in the first game of the following set.

1    The Regional Championships will be decided on a knockout basis.

2    The Championship games will be the best of three sets with a tie-break at six all in each set.

3    Seeding will be at the discretion of the Tournament Organiser.

5    The Championship finalists will qualify for the National Doubles Final. Competitors who elect to take part in the Regional Championships only must notify the Tournament Organiser at the end of the tournament.

6    The remaining to qualifying places will be decided upon a league basis.

7    Results of games which have taken place in the knockout event will be transferred to the league.

8    In all qualifying games one point will be awarded for a win.

9    The duration of matches in the league is at the discretion of the Tournament Organiser, but will normally be decided by the best of three sets with a tie-break at six all in each set.

10    The league will be split into two halves, all losers in each half of the knockout draw will play each other. The top two teams in each half will play in the following way:

The top two teams will qualify as 3 an 4.

12   The AMinA rules will apply in all cases.

13   If any of the qualifiers decide not to play in the national Doubles Finals they must notify the AMinA Secretary, not less than fourteen days prior to the National Finals. The Secretary will then offer a qualifying place in the Finals to the team with the next highest score.

14   The Tournament Organiser is to notify the AMinA Secretary of the results in each event.

15   Only bona fide members of clubs affiliated to the Amateur Miniten Association may enter the competition.

Rules for the National Doubles Finals

2    AMinA rules will apply in all cases.

4    Losing semi-finalists may play for third place, at the discretion of the Tournament organiser.

5    The format for National Doubles Finals is:

1    Competitors must be under the appropriate age on the day of the Tournament.

2    Entries will be taken up to and on the day of the Tournament.

3    Competitors may enter events in their own age group and the one immediately above.

4    The number of sets to be played in each event will be at the discretion of the Tournament Organiser.

1    The Senior Section is for players of all ages.

2    The Youth Section is for players under 21 years of age.

3    For the purposes of the AMinA the Youth Section of a Club is regarded as being separate from the Parent Club and must be affiliated to the AMinA in its own right.

7    Players under 18 years of age may play in the appropriate Junior events (see Appendix III) and in the Senior events representing either the Youth Section or the Senior Section of the Parent Club.

ie    They may enter the appropriate Junior events and the may represent either the Youth Section or the Senior Section of the Parent Club in the Mixed Doubles and Men's or Ladies Doubles.

8    Players under 21 years of age may not represent the Youth Section and the Senior Section of the Parent Club in the same competition.

9    Each club that is affiliated to the AMinA is allowed to send two entries for each event in the Regional qualifying tournaments (providing the above criteria have been satisfied).